The two antennas are placed on the vehicle a set distance apart. This distance is then entered into the VBOX using the front panel and display. An algorithm then uses this 'fixed baseline' to determine the relative position and height of each antenna to a few millimetres. This can be done because errors received at one antenna can be used to cancel out errors at the other antenna, given the known distance between the two. 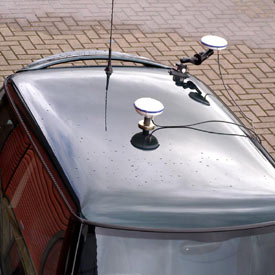 Knowing the relative height gives a very accurate angle between them, and this gives the pitch angle if configured longitudinally (down the roof), and roll angle if configured laterally (across the roof). In both orientations, the slip angle can still be measured, the user just has to apply a 90 degree offset which is available through the front panel.

Note: The slip angle varies across the width of the car, so it is important to place the antenna directly above the point at which you wish to measure this angle. Ground plane Antennas can be mounted outside of the body of the vehicle using a suitable mount (see picture on the right). 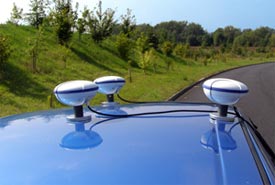 The exact distances between the primary antenna and the two additional antennas are entered into the unit, which then uses these ‘fixed baselines’ to enable an RTK technique which can measure the relative height and position of each antenna to a remarkable accuracy.

This is possible because similar errors are present at each antenna, so a sophisticated algorithm is able to eliminate these errors, resulting in a very precise relative height and position measurement. 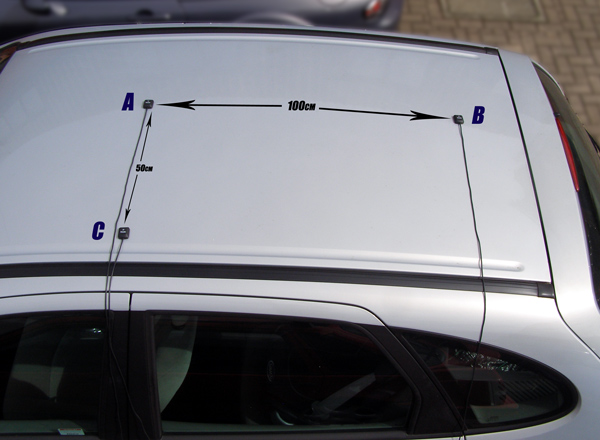 The exact distances between A & B and A & C have been measured and entered into the VBOX via the front panel. Note that the slip angle depends on where the measurement is taken, imagine turning a sharp corner very slowly, the front of the car will be showing a large negative slip angle value due to the steering input, and the rear of the car will show very little slip angle.

The slip angle also varies across the width of the car, so it is important to place the antenna directly above the point at which you wish to measure this angle. Ground plane Antennas can be mounted outside of the body of the vehicle using a suitable mount.

The VBOX has been configured with the distance between the antennae, and thanks to this layout is able to record all the measurements as shown in the table below.

We supply propriety, magnetic mount, ground plane antennas which have been optimised for use in this application to give the best results.

To obtain these accuracies, the distance between the antennas needs to be accurate to within 0.5cm, and the system used in a clear, open area without any trees, tall masts, fences or buildings nearby.