End of line testing determines that manufacturers must ensure their vehicles do not 'pull' to the left or right whilst being driven in a straight line and with no steering input. A VBOX used in combination with the free VBOX Test Suite software allows for accurate assessment of a vehicle's ability to achieve this.

The system can also be used to understand the effects of side winds, suspension geometry errors, and deviation during braking and lane change manoeuvres.

The vehicle heading is determined based on data captured immediately prior to the start of the centreline deviation test itself - allowing the test operative to drive in any direction across the test pad - as long as the vehicle is kept straight before letting go of the steering wheel. This flexibility is useful for different proving ground layouts, and means that tests can take place in a variety of locations.

If a run is completed without a satisfactorily steady heading, the software will highlight and 'reject' it based on the test conditions set before, allowing for immediate analysis and for further runs to be conducted. In this manner, complete accuracy and consistency of testing is ensured.

Centreline Deviation Testing can be conducted using a 100Hz VBOX 3i or Speed Sensor. A typical RACELOGIC test system comprises of:

In order to establish the vehicle heading to base the deviation calculation on, data is sampled in the short time before the centre line deviation test. This means that the test engineer can drive in any direction accross the test pad,
as long as the vehicle is kept in a straight line before letting go of the steering wheel.

This is useful for different proving ground layouts, and means that tests can take place in a variety of locations. To maintain accuracy, any runs in which the heading before the start of the test was not within user-defined tolerances during the averaging period are highlighted.

How does it work?

Commonly used for applications such as measuring side wind susceptibility, and vehicle deviation during various manoeuvres; the centre line deviation function can be used to show the deviation of a vehicle from a specified centre line to an accuracy of between 1 and 2cm (over a 30 second time period).

The high accuracy, Doppler derived velocity channels are measured and used to determine the lateral deviation from a specified track heading at every sample using geometric theories. This calculated deviation (lateral displacement) is an accumulative distance measurement, so it is most accurate when measured over short periods of time. 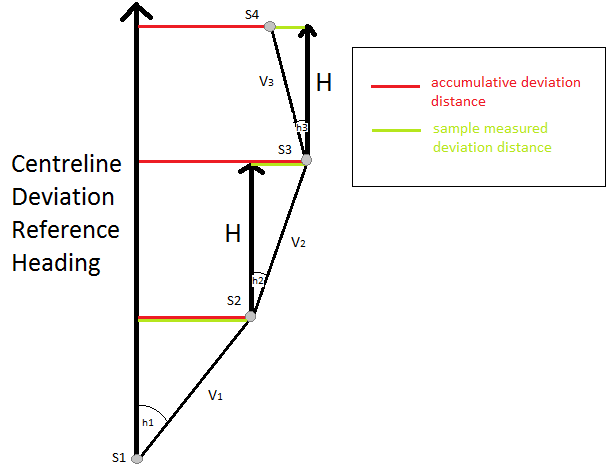 The above diagram simply displays how the accumulative deviation from a given centre line (H) is calculated.

Once the centre line deviation value starts calculating (S1), it will initially take the heading value recorded by the Doppler shift, and create a heading difference value (h1), relative to the defined Centre line deviation heading. Knowing the velocity at which the vehicle was travelling between samples (v) allows a sample measured deviation distance to be accurately determined. Using trigonometric relationships, this deviation distance is calculated using the following equation.

For successive samples a heading difference is then determined by comparing the current heading sample to the one previous.

The sample measured deviations are then accumulated throughout the test to produce a final centre line deviation result.