Driving robots for steering and throttle/brake control are often used in vehicle testing and development where the test procedures call for absolute consistency that a human driver cannot perform; and also in cases where the manoeuvres are not considered acceptably safe to have a driver at the wheel, or are extremely difficult to carry out (such as the Sine With Dwell element of ESC testing).

For some tests which need the vehicle to take a repeatable and highly accurate drive line – such as AEB or lane change testing - a VBOX 3i RTK is used to provide speed, heading, and positional data to the required accuracy for a driving robot to follow a predefined path.

We have used the example of a lane change manoeuvre in the video above to demonstrate the level of consistency that can be achieved with a VEHICO steering robot using the VBOX for path-following applications.

Robots from manufacturers such as Anthony Best Dynamics and DSD are also compatible with the VBOX 3i RTK for path-following, allowing for a wide variety of testing of ADAS and vehicle dynamics.

The VBOX 3i RTK provides highly accurate measurements of speed, position, heading and many more parameters. It is trusted by proving grounds and test laboratories, as well as vehicle and tyre manufacturers, for conducting a wide range of automotive tests including vehicle dynamics, ADAS and Autonomous development. With an update rate of 100 Hz, centimetre-level position accuracy, IMU integration and driving robot compatibility, the VBOX 3i RTK can be used for almost any automotive application that requires precision and accuracy.

ESC Testing with a Driving Robot

The high torque and steering wheel speed required to perform ESC testing means that a robot such as the ABD SR60 is essential. ABD take the CAN output from a VBOX 3i RTK for speed, heading, yaw and roll rate at 100 Hz and feed it into the robot which conducts and guides the whole test.

The car is 'characterised', by determining the necessary steering angle to achieve the required amount of lateral g (known as a 'Slowly Increasing Steer' procedure). A “Sine with Dwell” test is then performed with increasing yaw and displacement, on both right and left turns.

With this combination of high-accuracy VBOX data and a driving robot, the FMVSS126 test procedures can be conducted with precision and consistency.

Meeting the Euro NCAP standards requires the use of steering and pedal robots to maintain accurate conditions for speed, drive line, distance and braking, as laid out in the test requirements.

The VBOX 3i RTK can be used with driving robots from NCAP approved manufacturers such as Anthony Best Dynamics, to achieve the necessary level of consistency required when conducting such tests. 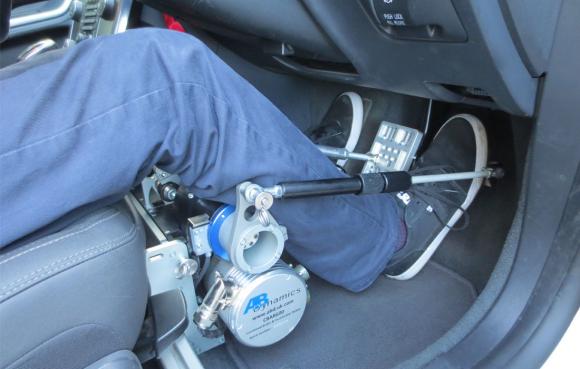 In 2017, Jaguar Land Rover approached Racelogic and VEHICO with the desire to perform a barrel-roll of their new E-Pace car, similar to the stunt originally carried out in the 1974 James Bond feature film “The Man with the Golden Gun”, in which a car is launched from a ramp, spinning through 270° before landing wheels-down.

Remarkable for its time, the original stunt is purportedly the first of its kind to have been computer-modelled. JLR set about recreating it using modern computing methods – but due to the complexity and risk involved, for the initial test runs it was deemed necessary to use a steering and throttle robot.

A test area was built at Santa Pod, the drag strip in Northamptonshire UK, with a ramp and enormous, custom-built airbag to catch the car after launching.

A VEHICO driving robot was installed along with a VBOX 3i RTK to ensure that the car hit the ramp at precisely the same point and speed every time – a feat not possible by even the best stunt drivers.

This consistency also allowed the ramp design team to make changes based on data with no human error involved.

This video shows one of the runs from the VEHICO chase car.

Once the ramp design was finalised, Jaguar Land Rover replicated the setup for a press conference held at the Excel centre in London. Stunt driver Terry Grant, who was involved with the project from the beginning, successfully jumped the E-Pace through 270° over 15.3 m – verified by Guinness as a world record.

Get the latest news and updates